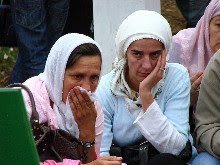 From July 9 to 13, I participated in the Biennial Conference of the International Association of Genocide Scholars (IAGS) held in Sarajevo, Bosnia & Herzegovina. Prior to the conference, I spent a few days in Mostar, still recovering from its shattering experience during the war and genocide of the 1990s. The Sarajevo conference took a day off on July 11 to observe the commemoration ceremonies for the Srebrenica massacre victims in Potocari, at the former UN base where the notorious gender-selective separations of men from women occurred. We were also shown the exhumation site of a mass grave of Srebrenica massacre victims. There are six galleries of photos posted to my website; be warned that the final one contains graphic images of the mass grave exhumation.
Posted by Adam Jones, Ph.D. at 10:57 PM