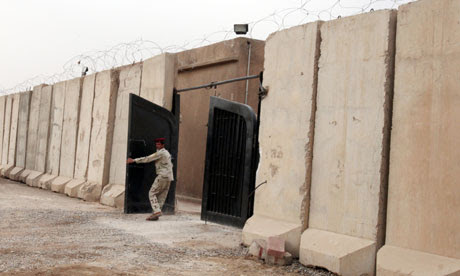 Iraqis Tortured at Secret Baghdad Prison, Says Watchdog
By Mark Tran
The Guardian, April 28, 2010
Photo: Karim Kadim, AP
"Iraqis held at a secret prison in Baghdad were routinely tortured using whips, electric shocks and rape, according to an investigation by Human Rights Watch. The organisation said it had interviewed 42 men who were among about 300 detainees transferred from the secret facility in the old Muthanna airport in west Baghdad to al-Rusafa into a special block of 19 cage-type cells over the past several weeks. The existence of the secret prison was revealed in the Los Angeles Times. All the detainees interviewed, Human Rights Watch said, described the same methods of torture. 'The jailers suspended their captives handcuffed and blindfolded upside down by means of two bars, one placed behind their calves and the other against their shins. All had terrible scabs and bruising on their legs. The interrogators then kicked, whipped and beat the detainees. Interrogators also placed a dirty plastic bag over the detainee's head to close off his air supply. Typically, when the detainee passed out from this ordeal, his interrogators awakened him with electric shocks to his genitals or other parts of his body.' Human Rights Watch called on the Iraqi authorities to hold a thorough investigation into the allegations, which come at a time of heightened political uncertainty and tension after close parliamentary elections last month.
The former prime minister Ayad Allawi, whose cross-sectarian coalition won a surprise victory, today called for the formation of an impartial caretaker government to prevent the country from sliding into violence and counter what he says are efforts by the prime minister, Nouri al-Maliki, to change the results. US officials fear that the disclosure of a secret prison in which Sunni Arabs were systematically tortured would not only become an international embarrassment, but would make it harder for Maliki to put together a viable coalition government. Human Rights Watch said the stories of torture were credible and consistent, with most of the 300 detainees displaying fresh scars and injuries that they said were a result of routine and systematic torture. All were accused of aiding and abetting terrorism, and many said they were forced to sign false confessions. 'The horror we found suggests torture was the norm in Muthanna,' said Joe Stork, deputy Middle East director at Human Rights Watch. 'The government needs to prosecute all of those responsible for this systematic brutality.' The men interviewed said the Iraqi army detained them between September and December 2009 after sweeps in and around Mosul, a stronghold of Sunni militants, including al-Qaida in Mesopotamia. They told Human Rights Watch that torture was most intense during their first week at Muthanna. Well-informed sources told Human Rights Watch that the secret facility was under the jurisdiction of Maliki's military office. One 24-year-old detainee, called I, said he was raped numerous times with a broomstick and pistol. An interrogator told him that they would rape his mother and sister if he did not confess. During another beating, interrogators hit him so hard that he lost several front teeth."
[n.b. This is the complete text of the dispatch. See the full text of the Human Rights Watch press release.]
Posted by Adam Jones, Ph.D. at 7:24 AM