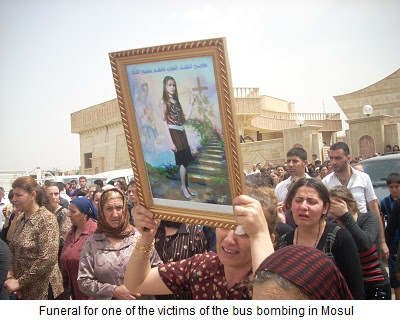 The Ethnic Cleansing of Assyrians in Iraq Must Be Stopped
Assyrian International News Agency dispatch, May 13, 2010
"Over half of the 1.4 million Christians who lived in Iraq before the 2003 invasion have fled the country. If they could, most of the others would have departed as well if some nation was ready to take them in. Nearly every human rights organization and numerous parliaments are in agreement that an ethnic and religious cleansing has been underway in Iraq (report). Non-Muslims are not welcome any longer in large segments of the country. Kidnappings, rapes and executions are daily occurrences for the non-Muslims of Iraq. Sixty churches have been bombed, sometimes systematically on the very same day in different places in the country. One of the worst attacks happened on May 2nd. A busload of Christian Assyrian students was attacked between two checkpoints. In the place where they should have been safest, two roadside bombs were detonated.
The next morning I received a video taken with a mobile telephone at one of the hospitals where the wounded and injured students were being cared for. In Sweden there are thousands of Assyrian Iraqis hidden from the authorities because they have been rejected as refugees and are forbidden to remain in Sweden. They are hunted down by the Swedish police. If they are arrested, they are put in prison or in custody until the authorities have enough refugees to fill a plane with which to fly them to Baghdad. They are dumped by the Swedish police back to that very city where they can be slaughtered for their religion or ethnicity. During the past two years I have followed some thirty persons who have been forcibly expelled. Nearly all of them have fled Iraq again. [...]"
Posted by Adam Jones, Ph.D. at 12:25 PM