United States / Law of Genocide and Crimes against Humanity 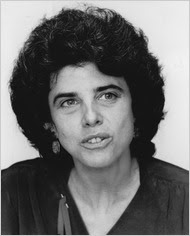 Rhonda Copelon, Lawyer in Groundbreaking Rights Cases, Dies at 65
By Dennis Hevesi
Photo: Dith Pran (yes, that Dith Pran)
The New York Times, May 8, 2010
"Rhonda Copelon, a human rights lawyer who played a major role in several groundbreaking cases, including one that allowed victims of abuses in other countries to seek justice in American courts, died Thursday at her home in Manhattan. She was 65. The cause was ovarian cancer, said Nancy Stearns, a friend and colleague of Ms. Copelon's at the Center for Constitutional Rights. Ms. Copelon was a vice president of the center and a professor at the City University of New York School of Law at Queens College. In her 40-year career, she worked on cases involving gender-based violence, racial discrimination, government wiretapping, job discrimination and abortion rights. Ms. Copelon's work 'altered the bedrock of how US courts treat international human rights abuses,' Michelle J. Anderson, the dean of the CUNY School of Law, said in a statement.
In the late 1970s, Ms. Copelon and Peter Weiss, another lawyer at the Center for Constitutional Rights, brought a civil suit, Filártiga v. Peña-Irala, which helped establish that victims of human rights abuses committed abroad had recourse in United States courts. The case involved a family in Paraguay whose son had been tortured to death by the police in the capital, Asunción. The police chief there eventually moved to Brooklyn and was soon followed by the victim's sister, who filed suit. A federal appeals court in New York ruled on June 30, 1980, that the family had a right to sue for damages, setting a precedent that has been upheld in similar cases. ... At the CUNY law school, which she had joined when it opened in 1983, she was a founder of the International Women’s Human Rights Clinic and the Women's Caucus for Gender Justice. Working with her students, she filed amicus briefs in cases before the International Criminal Tribunals for Rwanda and the former Yugoslavia that contributed to recognition in international law of rape as a crime of genocide and torture. Until then, Ms. Copelon told The New York Times in 2002, 'rape was considered a kind of collateral damage' and 'seen as part of the unpreventable, fundamental culture of war.' [...]"
Posted by Adam Jones, Ph.D. at 4:53 PM