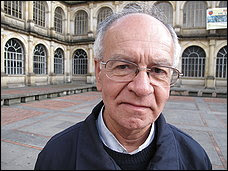 Priest Faces Criticism for Shining Light on Human Rights Abuses in Colombia
By Javier Giraldo
The Washington Post, June 12, 2010
[Photo: Juan Forero/WP]
"The ruling issued this week was one of the most severe ever handed down in Colombia against a member of the security forces: 30 years in prison for a retired army colonel found responsible for the disappearance of 11 people in 1985. And it happened in part because of the tireless work of a mild-mannered Catholic priest, the Rev. Javier Giraldo, who sought out evidence from witnesses and made sure that the relatives of the victims were heard by prosecutors and journalists. For 30 years, Giraldo has been investigating some of the most heinous human rights abuses committed during Colombia's shadowy war and blaming those he says are responsible -- often US-backed security forces. In recent weeks, that work has garnered attention like never before, with his adversaries issuing public threats against the man they call 'the Marxist priest,' and even President Álvaro Uribe leveling criticism against him.
Giraldo's most recent campaign, which resulted in former police major Juan Carlos Meneses,to President Alvaro, to commit murders in a small northern town in 1994. Giraldo accompanied Meneses to Buenos Aires, where he recounted his story in a videotaped meeting with prominent Argentines. ... Giraldo's role in the Meneses case prompted President Uribe to call him 'a useful idiot' of criminal bands out to discredit the administration. A more customary accusation came from Plinio Apuleyo Mendoza, a pro-government essayist who labeled Giraldo a 'nefarious priest' who does the bidding of the country's largest guerrilla army. But others see Giraldo as an almost mythical figure who tirelessly collects evidence about crimes that have gone unpunished. That means urging witnesses to come forward, even soldiers and police overcome by their conscience after participating in atrocities. [...]"
Posted by Adam Jones, Ph.D. at 2:57 AM