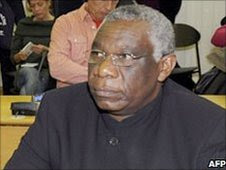 Finland Sentences Rwanda Preacher to Life for Genocide
BBC Online, June 11, 2010
Photo: Agence France-Presse
"A Finnish court has sentenced a Rwandan preacher to life in jail for his participation in Rwanda's genocide. Francois Bazaramba, 59, moved in 2003 to the Nordic country, which allows prosecutions for crimes against humanity wherever they are committed. The court said he had intended to 'destroy in whole or part the Rwandan Tutsis as a group,' AP reports. About 800,000 Tutsis and moderate Hutus were killed by Hutu militias in the 100-day slaughter in 1994. His lawyers told Reuters news agency that he would appeal against the sentence.
Mr. Bazaramba has been held in detention in Finland since 2007, four years after seeking asylum there. At the time of the genocide, he was a pastor in the Baptist church in Nyakizu in southern Rwanda. According to Finnish newspaper Helsingin Sanomat, the court found him guilty of orchestrating deadly attacks, and organising the torching of Tutsi homes. In a statement the court said he had spread anti-Tutsi propaganda and incited 'killings through fomenting anger and contempt towards Tutsis.' 'The court has found Bazaramba guilty of an offence which without a genocidal intent would be judged as a murder or incitement to murder,' the statement said. 'For those crimes, the only possible punishment is life imprisonment.' He was acquitted of 10 counts of murder and of providing training and acquiring weapons, Helsingin Sanomat reports. During the trial, the court heard from 68 witnesses, travelling to Rwanda and Tanzania to hear some testimonies. Last year Finland declined a request by Rwanda to extradite Bazaramba, saying he might not receive a fair trial at home."
Posted by Adam Jones, Ph.D. at 3:42 PM