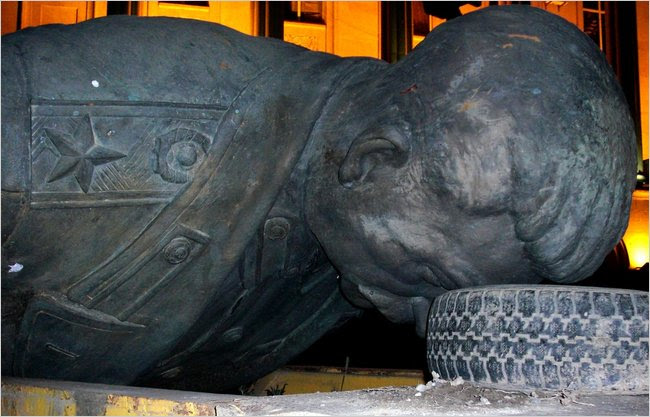 Georgia Knocks Stalin Off His Pedestal
By Sarah Marcus and Ellen Barry
The New York Times, June 25, 2010
Photo: Reuters
"In the predawn darkness on Friday, Georgian authorities carried out a clandestine operation in Gori's central square. Wrapping thick cables around Stalin's neck and under one of his armpits, they hoisted him off the pedestal where he has stood for 48 years and set him nose-first on the back of a flatbed truck. Georgian authorities, seeking to purge their country of Soviet monuments, on Friday removed a statue of Stalin from the central square of Gori, Stalin's birthplace. It had stood there for 48 years. By morning, the statue was long gone -- a relief to Georgia's leadership, which has been increasingly intent on moving the 20-foot monument since a 2008 war with Russia. It was a different matter for many citizens in Gori, however, whose claim to fame during the Soviet era was the brick house here where Josef Stalin was born, and where older Georgians still revere him.
'They were afraid of the people's reaction, that's why they did it at night,' said Gocha Suriashvili, 62, who had gathered with friends at the foot of the empty pedestal. Asked if he was proud of living in Stalin's birthplace, he shrugged incredulously at the stupidity of the question. ... Leaders in the capital, Tbilisi, have made it a goal to purge the country of its remaining Soviet monuments, symbolically breaking free of Moscow's dominance. But the Stalin statue has been a delicate matter since the 1950s, when the Soviet leader Nikita S. Khrushchev denounced Stalin's 'cult of personality.' Though monuments to Stalin were later dismantled across the Soviet Union, Mr. Khrushchev left Gori's statue standing out of respect for the city's passionate loyalty to the dictator. On Friday, the culture minister, Nikolos Rurua, dismissed reports that the removal was intentionally kept quiet, pointing out that several camera crews were present. He said the vast majority of Georgians shared his view of Stalin as 'a mass murderer and a political criminal.' 'Stalin is popular only among octogenarians in his home town; he is not popular in Georgia,' he said. 'This is not a local issue, it is a national one. No consultation was necessary.' Georgian authorities will replace the statue with a memorial 'to the victims of the Soviet dictatorship, victims of Stalin’s policies inside and outside Georgia and victims of the 2008 war,' as well as foreigners who died in the war, Mr. Rurua said. A Dutch cameraman was killed in August of 2008 when Russian warplanes bombed the square. Some in Gori said they expected the statue to find a new home in the city's Stalin museum, where the brick-and-timber hut where Stalin was born is surrounded by a grand Greco-Italianate pavilion. [...]"
Posted by Adam Jones, Ph.D. at 4:54 AM