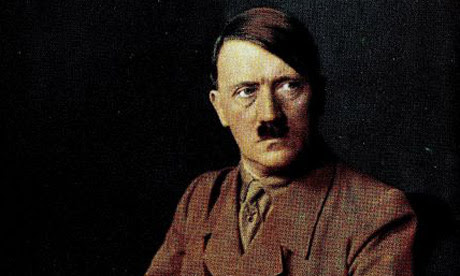 Why Bollywood's Film about Hitler is Profoundly Misguided
By Alex von Tunzelmann
The Guardian, June 11, 2010
"A first-time Indian director, Rakesh Ranjan Kumar, has announced that he will make a movie about Adolf Hitler. Dear Friend Hitler stars Indian actors Anupam Kher and Neha Dhupia as Hitler and Eva Braun, and will focus on what the director claims was 'Hitler's love for India and how he indirectly contributed to Indian independence.' ... For many westerners, Hitler remains history's ultimate evil. In India, awareness of the Holocaust is limited. Characters in Bollywood films jokingly refer to bossy family members as 'Hitler' -- provoking a sharp intake of breath from many western viewers, who associate Hitler with crimes significantly worse than telling you to do your chores. In 2006, a Nazi-themed cafe opened in Mumbai with the name Hitler's Cross. ... Dear Friend Hitler has not yet been made, and it is too early to say whether it will be any good or not. What can be said is that the reported comments of Kumar and one of his producers display a shocking ignorance of historical fact.
Kumar's assertion that Hitler had a 'love for India,' and his producer's statement that 'if we should thank anybody for Indian freedom, it should be Hitler,' are not merely misguided -- they are completely wrong. The idea that Hitler should be thanked for Indian independence proceeds from the view that, by weakening Britain, Germany forced it to abandon its empire. If so, it would be more logical to thank America, on which Britain was forced to depend for loans after the war, and whose government put pressure on the British to grant Indian independence. Hitler never supported Indian self-rule. He advised British politicians to shoot Gandhi and hundreds of other leaders of the freedom struggle. Repeatedly, he expressed support for British imperialism. He only regretted that it was not harsh enough. 'If we took India,' he once threatened, the Indian people would soon long for 'the good old days of English rule.' Hitler's support of the Indian National Army, a fascist-allied fighting force led by Subhas Chandra Bose in the 1940s, has apparently persuaded the makers of Dear Friend Hitler that the dictator loved India. In fact, the Nazi regime's disgust when Bose became romantically involved with a German woman revealed its true feelings. Hitler was happy to let Bose's recruits die fighting the British. But he never stopped believing that Indian people were racially inferior to white Europeans, and that any attempt at Indian independence would inevitably lead to reconquest by a 'superior' race. [...]"
Posted by Adam Jones, Ph.D. at 2:45 PM