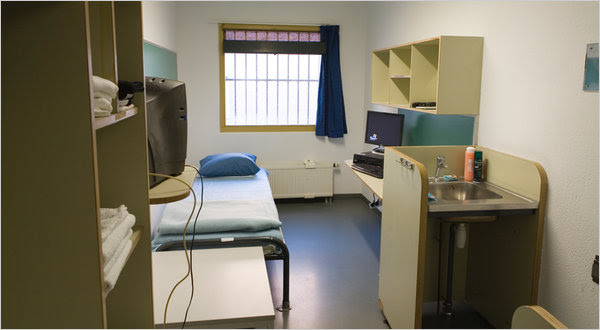 Accused of War Crimes, and Living With Perks
By Doreen Carvajal
The New York Times, June 3, 2010
Photo: ICTY
"Since the days after World War II when people accused as Nazi criminals awaited their fates in the grimness of Nuremberg Prison, reformers have dramatically reshaped the standards under which suspects accused of the vilest war crimes are being held. Beyond the brick towers of a Dutch prison just east of here is a compound where former Congolese warlords, Serbian militia leaders and a former Liberian president accused of instigating murder, rape and enslavement are confined in two detention centers with private cells stocked like college dormitories, with wooden bookcases, television sets and personal computers. Among the other amenities are a gym, a trainer, a spiritual room and a common kitchen where some former enemies trade recipes and dine on cevapi, or Balkan meatballs. Three warlords whose cases are before the International Criminal Court are also receiving free legal aid at a monthly cost of about €35,000, or $43,000.
... But an additional benefit -- travel subsidies of tens of thousands of euros for family visits from distant African countries -- is stirring an emotional debate among the court's donor nations about whether the entitlements at the cluster of international courts meeting here have reached their limits. Each court was intended, in part, to provide a model of humane, civilized detention that contrasts starkly with the horrific nature of the crimes the inmates are accused of. But how much is too much? A group including France, Italy and smaller states is arguing that the nations financing the courts should not be covering benefits that they do not provide in their own prisons -- and do not want to. What precedent might be set, they ask, if they contribute to these provisions here? [...]"
Posted by Adam Jones, Ph.D. at 9:35 AM