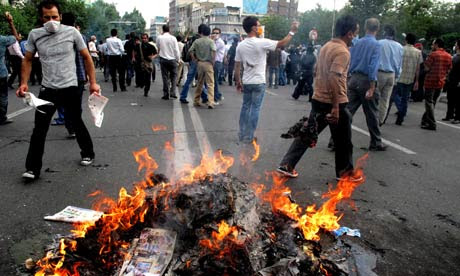 Amnesty International Issues Warning over Iran Human Rights Abuses
By Ian Black
The Guardian, June 9, 2010
Photo: "Supporters of presidential candidate Mir Hossein Mousavi during the election protests in Tehran" (Sipa Press/Rex Features).
"Concerns about Iran's nuclear programme should not prevent international action over human rights abuses by the Islamic regime since last year's disputed election, Amnesty International warns today. Cataloguing intensifying repression by the regime and its shadowy intelligence services, Amnesty also calls for a 'concerted and robust response towards the failure of the Iranian authorities to address human rights concerns.' Its report, From Protests to Prison, says at least 5,000 people have been arrested since the mass protests that erupted a day after Mahmoud Ahmadinejad claimed victory over Mir Hossein Mousavi, the Green movement leader, in the disputed presidential election of 12 June last year. Torture, beatings, rape and solitary confinement have all been used, with hundreds sentenced after unfair trials to lengthy prison sentences.
'Unlawful killings and all too frequent reports of torture and other ill-treatment by state actors who enjoy near total impunity are still not being investigated,' Amnesty says. Claudio Cordone, Amnesty's interim secretary general, said: 'The Iranian government is determined to silence all dissenting voices while at the same time trying to avoid all scrutiny by the international community into the violations connected to the post-election unrest.' ... Political activists, journalists, film-makers, students, human rights defenders and lawyers have all been arrested. Action has also intensified against already banned groups such as monarchists, Bahá'ís and the People's Mujahideen. [...]"
Posted by Adam Jones, Ph.D. at 3:55 AM