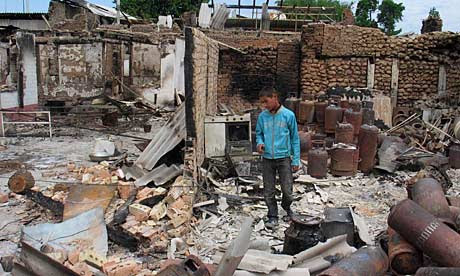 Kyrgyzstan Killings Are Attempted Genocide, Say Ethnic Uzbeks
By Luke Harding
The Guardian, June 16, 2010
Photo: "An ethnic Uzbek boy walks amid debris of a ruined building in Osh, Kyrgyzstan." (Kazbek Basayev/Reuters)
"It was early afternoon when the mob surged down an alley of neat rose bushes and halted outside Zarifa's house. The Kyrgyz men broke into her courtyard and sat Zarifa down next to a cherry tree. They asked her a couple of questions. After confirming she was an ethnic Uzbek, they stripped her, raped her and cut off her fingers. After that they killed her and her small son, throwing their bodies into the street. They then moved on to the next house. 'They were like beasts,' Zarifa's neighbour, Bakhtir Irgayshon, said today, pointing to the gutted bedframe where she had been assaulted. A few pots and pans remained; the rest of the family home was a charred ruin. Zarifa's husband, Ilham, was missing, Irgayshon said, probably dead. Only his mother, Adina, survived the Kyrgyz-instigated conflagration that engulfed the neighbourhood of Cheremushki last Friday.
The scale of the ethnic killing that took place in Osh -- as well as in other towns and villages in southern Kyrgyzstan -- was grimly obvious. In the next street were the remains of another victim. He burned to death in his bed. Not much was left, only a jigsaw-like spine and hip. Nearby, Uzbek survivors were retrieving the bodies of seven small children. They had been incinerated, together with their mother, while cowering in a dark cellar. Witnesses said the attacks by the Kyrgyz population on the Uzbek minority were attempted genocide. The violence erupted in Osh last Thursday evening, possibly ignited by a row in a casino. But much of it appeared co-ordinated and planned, Uzbeks said. The attacks took the prosperous outlying Uzbek areas of town unawares. ... According to Rustam [an Uzbek lawyer] the official toll from the riots -- 178 dead and 1,800 injured -- is a woeful underestimate. In reality, around 2,000 Uzbeks were slaughtered, he said, as the pogroms quickly spread from Osh to Jalal-Abad, 25 miles away, and other Uzbek villages in the south. Rustam said: 'I carried 27 bodies myself. They were just bones. We are talking here about genocide.' [...]"
Posted by Adam Jones, Ph.D. at 2:23 AM