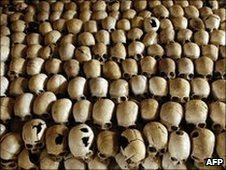 Uganda Reburies Lake Victoria's Rwanda Genocide Victims
BBC Online, June 25, 2010
Photo: Agence France-Presse
"The last of three ceremonies to rebury victims of Rwanda's 1994 genocide who were washed up on the shores of Lake Victoria in Uganda has taken place. Nearly 11,000 bodies thrown into rivers in Rwanda were recovered from the lake and buried by Ugandan villagers. Their bodies have now all been exhumed from different places and buried at three special memorial sites. Some 800,000 Tutsis and moderate Hutus died in the 100-day slaughter. The BBC's Joshua Mmali at Friday's ceremony in Ggolo said officials from Rwanda and Uganda attended the reburial. Genocide survivors were also present. 'I am a survivor of the 1994 genocide against the Tutsis. I am happy today because at this time I am able to give my relatives burials,' Jenny, whose husband was killed, told the BBC. 'I thank the government of Uganda for this event,' she said.
The decision to create three memorial sites at Lambu, Kasensero and Ggolo was made last year on the 15th anniversary of the genocide. It has taken a year to find the different burial places along Lake Victoria and exhume the remains. Some of those responsible for the genocide said the Tutsis originally came from Ethiopia, so they threw their victims into the rivers to send them back. 'It is important to give them that decent burial -- these are people who have relatives,' Frank Mugambagye, Rwanda's ambassador to Uganda, told the BBC's Network Africa programme. 'These sites should provide places that people are going to be reminded that what happened should never happen again,' he said. 'This a promise, this is a pledge that the world took -- a pledge that we in Rwanda take very seriously.' [...]"
Posted by Adam Jones, Ph.D. at 2:14 PM