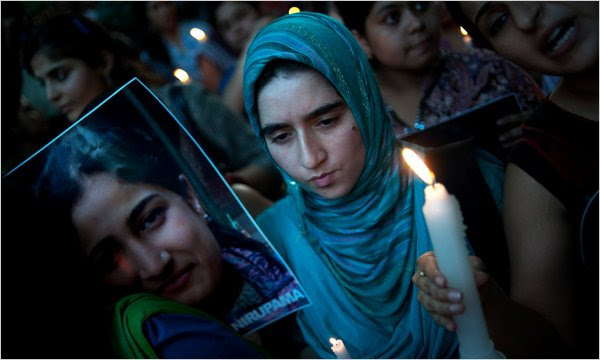 In India, Castes, Honor and Killings Intertwine
By Jim Yardley
The New York Times, July 9, 2010
Photo: "A candlelight vigil in New Delhi in May, where supporters of Nirupama Pathak, a 22-year-old Hindu woman from eastern India, called for her death to be prosecuted as an honor killing." (Keith Bedford/New York Times)
"When Nirupama Pathak left this remote mining region for graduate school in New Delhi, she seemed to be leaving the old India for the new. Her parents paid her tuition and did not resist when she wanted to choose her own career. But choosing a husband was another matter. Her family was Brahmin, the highest Hindu caste, and when Ms. Pathak, 22, announced she was secretly engaged to a young man from a caste lower than hers, her family began pressing her to change her mind. They warned of social ostracism and accused her of defiling their religion. Days after Ms. Pathak returned home in late April, she was found dead in her bedroom. The police have arrested her mother, Sudha Pathak, on suspicion of murder, while the family contends that the death was a suicide. The postmortem report revealed another unexpected element to the case: Ms. Pathak was pregnant. 'One thing is absolutely clear,' said Prashant Bhushan, a social activist and lawyer now advising Ms. Pathak's fiancé. 'Her family was trying their level best to prevent her from marrying that boy. The pressure was such that either she was driven to suicide or she was killed.' In India, where the tension between traditional and modern mores reverberates throughout society, Ms. Pathak's death comes amid an apparent resurgence of so-called honor killings against couples who breach Hindu marriage traditions. This week, Prime Minister Manmohan Singh ordered a cabinet-level commission to consider tougher penalties in honor killings. [...]"
Posted by Adam Jones, Ph.D. at 2:07 AM