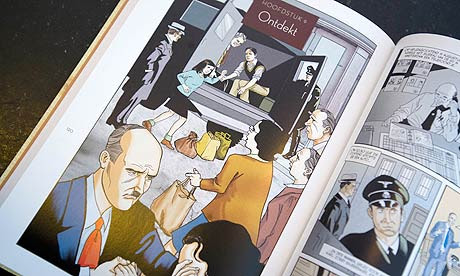 Anne Frank Graphic Novel Launched
Associated Press dispatch in The Guardian, July 9, 2010
Photo: "Graphic novel version of The Diary of Anne Frank, by Sid Jacobson and Ernie Colón." (Evert Elzinga/AP)
"The Anne Frank House Museum in Amsterdam has launched a graphic novel version of the teenage Jewish diarist's biography, hoping to bring her story and death in a Nazi concentration camp to a wider audience. Spokeswoman Annemarie Bekker said the publication was aimed at teenagers who might not otherwise pick up Anne Frank's diary, the most widely read document to emerge from the Holocaust. 'Not everyone will read the diary,' she said. 'The one doesn't exclude the other.' Using the style of comic books to illustrate serious historical topics, even genocide, is not new. Maus, Art Spiegelman's graphic biography of his father, a survivor of the Auschwitz death camp, won a special Pulitzer prize in 1992. The Anne Frank biography, authorised by the museum, is a collaboration between American author Sid Jacobson and artist Ernie Colón, the creative team behind the bestselling graphic novel of the 9/11 Commission report. Publisher Hill & Wang will launch the illustrated book in the US later this month; Macmillan is publishing it in Britain in the autumn. Translations in German, French and Italian are planned. [...]"
Posted by Adam Jones, Ph.D. at 6:26 AM