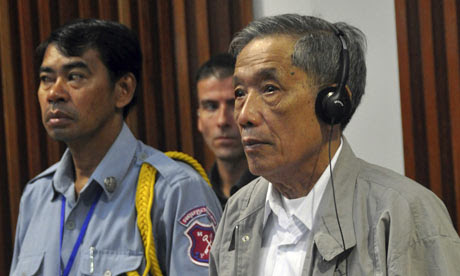 Former Khmer Rouge Chief Jailer Appeals against Conviction
Associated Press dispatch in The Guardian, August 25, 2010
Photo: "Khmer Rouge chief torturer and jailer Kaing Guek Eav, better known as Duch, during his trial." (Lars Olsen/Reuters)
"The former chief jailer of the Khmer Rouge has appealed against his conviction and 35-year prison sentence, his lawyer said today. Kaing Guek Eav, alias Duch, was convicted of war crimes and crimes against humanity in July and sentenced to 35 years in prison -- reduced to 19 years by time already served and other factors. Prosecutors have already appealed for a longer sentence, saying the judgment 'gives insufficient weight to the gravity of Duch's crimes.' Duch is the only senior Khmer Rouge member held by the tribunal to admit guilt and express remorse. But in a move that stunned judges and onlookers, he and his lawyer on the last day of his trial asked that he be acquitted and freed. The ruling by a UN-backed tribunal marked the first trial of a major Khmer Rouge figure more than three decades after the regime's brutal rule in the 1970s led to the deaths of an estimated 1.7 million people from execution, disease, starvation and overwork. Duch's lawyer Kar Savuth said the appeal argues Duch should be acquitted due to legal errors made by the tribunal and because it lacked jurisdiction.
Duch's lawyers said he was one of 196 prison chiefs and was merely following orders. Both Duch's appeal and the prosecutor's filing will be decided by the tribunal's supreme court chamber. Duch (pronounced Doik) supervised the notorious S-21 prison in Phnom Penh where as many as 16,000 people were tortured before being executed. Survivors have expressed anger that the sentence was too weak and could allow a former key player in the genocide to one day walk free. [...]"
Posted by Adam Jones, Ph.D. at 10:10 AM