Democratic Republic of the Congo / Rwanda 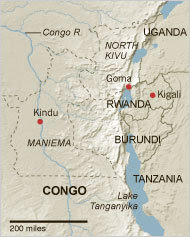 UN Congo Report Offers New View on Genocide Era
By Howard W. French
The New York Times, August 27, 2010
"A forthcoming United Nations report on 10 years of extraordinary violence in the Democratic Republic of Congo bluntly challenges the conventional history of events there after the 1994 Rwandan genocide, charging that invading troops from Rwanda and their rebel allies killed tens of thousands of members of the Hutu ethnic group, including many civilians. The 545-page report on 600 of the country’s most serious reported atrocities raises the question of whether Rwanda could be found guilty of genocide against Hutu during the war in neighboring Congo, but says international courts would need to rule on individual cases. In 1994, more than 800,000 people, predominantly members of the ethnic Tutsi group in Rwanda, were slaughtered by the Hutu. When a Tutsi-led government seized power in Rwanda, Hutu militias fled along with Hutu civilians across the border to Congo, then known as Zaire. Rwanda invaded to pursue them, aided by a Congolese rebel force the report also implicates in the massacres. While Rwanda and Congolese rebel forces have always claimed that they attacked Hutu militias who were sheltered among civilians, the United Nations report documents deliberate reprisal attacks on civilians. The report says that the apparently systematic nature of the massacres 'suggests that the numerous deaths cannot be attributed to the hazards of war or seen as equating to collateral damage.' It continues, 'The majority of the victims were children, women, elderly people and the sick, who were often undernourished and posed no threat to the attacking forces.' ... The Rwandan government responded angrily to the report, calling it 'outrageous.' The topic is extremely delicate for the government, which has built its legitimacy on its history of combating the genocide in Rwanda. Political figures there have been accused of perpetuating a 'genocide ideology' for making claims that are similar to the report's. ... The release of the report appears to have been delayed in part over fears of the reaction of the Rwandan government, which has long enjoyed strong diplomatic support from the United States and Britain. There is concern in the United Nations that Rwanda might end its participation in peacekeeping operations in retaliation for the report. 'No one was naïve enough to think that inspecting mass graves in which Rwandan troops were involved would make Kigali happy, but we have shared the draft with them,' said a senior official at the United Nations High Commission for Human Rights in Geneva, which oversaw the investigation. The official spoke on the condition of anonymity because the findings had not been officially released. He said: 'Voices have said, "Can't we just delete the genocide references? Isn’t this going to cause a lot more difficulties in the region?" But these voices have not carried the day.'
... The report contains a chilling, detailed accounting of the breakup of Hutu refugee camps in eastern Zaire at the start of the war in October 1996, followed by the pursuit of hundreds of thousands of Hutu refugees across the country's vast hinterland by teams of Rwandan soldiers and their Zairean rebel surrogates, the Alliance des Forces Démocratiques pour la Libération du Congo. Those forces were led by Laurent Kabila, who took over as president the next year, and who was the father of Congo’s current president, Joseph Kabila. The report presents repeated examples of times when teams of Rwandan soldiers and their Congolese rebel allies lured Hutu refugees with promises they would be repatriated to Rwanda, only to massacre them. In one such episode, advancing Congolese rebel fighters and Rwandan troops summoned refugees to a village center, telling them they would be treated to meat from a slaughtered cow to strengthen them for their trek back to Rwanda. As the Hutu began to register their names by prefecture of origin, a whistle sounded and soldiers opened fire on them, killing between 500 and 800 refugees, the report said. In other instances, as survivors scrambled desperately through thick rain forest in a country as large as Western Europe, extermination teams laid ambush along strategic roadways and forest paths, making no distinction between men, women and children as they killed them. Although the report does detail attacks when there were military targets, notably at Tingi Tingi, a Hutu camp in Maniema Province, such targets are extremely rare in the report. [...]"
Posted by Adam Jones, Ph.D. at 12:53 AM