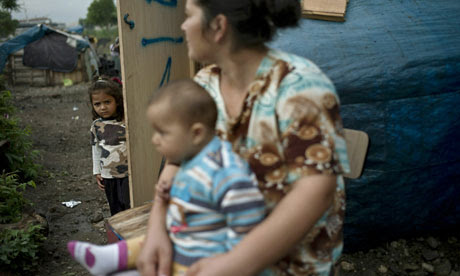 EU Turning Blind Eye to Discrimination against Roma, Say Human Rights Groups
By Leigh Phillips
The Guardian, July 30, 2010
Photo: Jeff Pachoud/AFP/Getty Images
"The European Union was today accused of 'turning a blind eye' as countries across Europe carried out a wave of expulsions and introduced new legislation targeting the Roma. Human rights groups criticised the EU for failing to address the real issues driving Europe's largest ethnic minority to migrate in the first place and for choosing not to upbraid countries for breaking both domestic and EU laws in their treatment of them. The criticism came after France announced it would round up and expel illegal Roma immigrants and destroy hundreds of their encampments. Elsewhere, it emerged that the city of Copenhagen had requested Danish government assistance to deport up to 400 Roma, and that Swedish police had expelled Roma in breach of its own and EU laws. In Belgium a caravan of 700 Roma has been chased out of Flanders and forced to set up camp in French-speaking Wallonia in the south. Italy, which in 2008 declared a state of emergency due to the presence of Roma, and evicted thousands of them, mainly to Romania and Bulgaria, is continuing to implement the policy to this day.
Germany is in the process of repatriating thousands of Roma children and adolescents to Kosovo, despite warnings they will face discrimination, appalling living conditions, lack of access to education as well as language problems, because many of them were born in Germany and do not speak Serbian or Albanian. In eastern European countries that are EU members, such as the Czech Republic, Hungary, Slovakia, Romania and Bulgaria, accounts are rife of widespread discrimination against Roma, including physical attacks. ... Amnesty [International] said the EU should penalise countries that have persistently failed to uphold the human rights of Roma. Among the harshest measures applicable under the charter of fundamental rights that came into force with the Lisbon treaty last year is the withdrawal of voting rights, or even expulsion from the union. [...]"
Posted by Adam Jones, Ph.D. at 5:50 AM