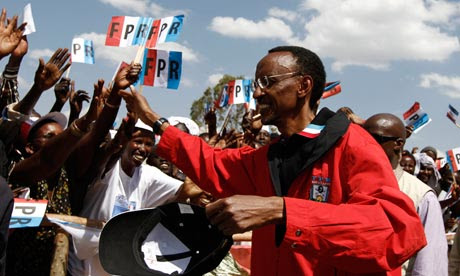 Rwanda Government Critics in Fear as Election Approaches
By Xan Rice
The Guardian, August 6, 2010
Photo: "Rwandan president Paul Kagame speaks to supporters on the election trail." (Marc Hofer/AP)
"The sun is still low and the city is spotless. Women sweep the streets anyway. Red, white and blue ribbons have been wrapped around poles and arches, the colours of the ruling Rwandan Patriotic Front (RPF). In a few hours the party leader, President Paul Kagame, whose earnest face peers down from a giant billboard, will briefly pass through Butare on the campaign trail, before exiting down a road so steep that farm-strong men must push their bicycles uphill. At the bottom of the valley there is a small bridge and a river and a pair of pied crows darting overhead. A tranquil scene. A crime scene. On the morning of 13 July, a blue Toyota pickup was found here. Its windscreen was smashed. The 61-year-old owner of the car was missing. Andre Kagwa Rwisereka was the vice-president of the Democratic Green party, an opposition movement that had been refused permission to contest Monday's presidential election. His body was found a day later, about a mile up the road, among pine trees on the edge of a ravine. His head was partially severed. A butcher's knife was found nearby. Taken alone, the incident would have been disturbing -- especially in a country normally considered so safe. But this was not the first government critic to die suspiciously.
In late June one of the country's last independent journalists, whose newspaper had been banned in April, was gunned down in the capital, Kigali. He had reportedly been investigating the non-fatal shooting in Johannesburg a few days earlier of Rwanda's former army chief of staff, who had fled into exile. Although the authorities have denied any involvement, the murders and attempted murder have cast a shadow over an election already compromised by the government's refusal to allow any genuine challenger on to the ballot. The attacks have also shaken the faith of Rwanda's regional and western allies, who have repeatedly praised Kagame in recent years for his efforts in transforming the country since the genocide of 1994. 'We really thought this country was moving in the right direction,' said a western diplomat in Kigali. 'But what has happened this year calls into question the judgment of senior leaders here.' The reasons for lauding Rwanda and offering large sums of aid -- Britain gives £55m a year -- are easy to understand. By the time the RPF, then a Tutsi-led rebel force, ended the slaughter 16 years ago, about 800,000 Tutsis and moderate Hutus had been killed on the orders of Hutu extremists. Rwanda was in ruins. Slowly, but with great purpose, the new government set about rebuilding the country and encouraging reconciliation. A construction boom has transformed Kigali into a modern capital. The infrastructure, especially roads, has been drastically improved. Tourists have poured in. Improvements in health and education are beyond dispute. The long working hours of government ministers shock foreign civil servants. Corruption is negligible compared with Rwanda's neighbours. There are long-running blackspots: the army's negative role in eastern Democratic Republic of Congo, for example, and the lack of civil liberties. Still, by the end of last year, with Rwanda just admitted to the Commonwealth, the overall picture was optimistic. But as in the runup to the last election, in 2003, developments this year have been overwhelmingly negative. [...]"
Posted by Adam Jones, Ph.D. at 1:33 PM