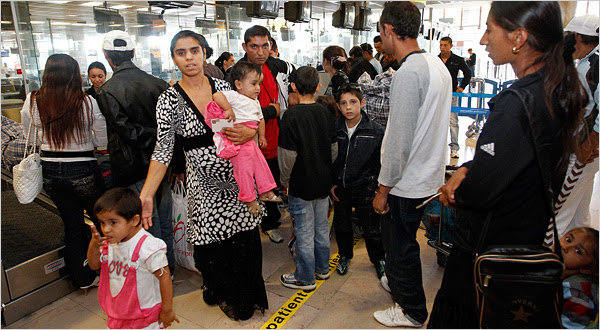 EU Calls France's Roma Expulsions a "Disgrace"
By Katrin Bennhold and Stephen Castle
The New York Times, September 14, 2010
Photo: "Roma families at the check-in desk for flights to Romania as part of a voluntary [sic] repatriation program at the airport near Marseille, France, on Tuesday." (Jean-Paul Pelissier/Reuters)
"In blunt language, the European Commission on Tuesday called France's deportation of Roma a 'disgrace' and threatened legal action against the French government, claiming that it had misled European officials and that it was breaking European law. President Nicolas Sarkozy, who faces record low approval ratings at home, has called Roma camps a source of crime and prostitution. Over the summer, his government expelled about 1,000 Roma, also known as Gypsies, in a move criticized by human rights groups and the Socialist opposition. Over the weekend, a French directive was leaked that singles out the Roma as an ethnic group in the crackdown, contradicting repeated assurances by the government to the contrary. The European Union justice commissioner, Viviane Reding, said that it was 'shocking' that assurances given by French ministers in Brussels were being directly contradicted by actions in Paris. 'My patience is wearing thin. Enough is enough,' a visibly angry Ms. Reding said at a news conference in Brussels. 'No member state can expect special treatment when fundamental values and European laws are at stake.'
Ms. Reding likened the focus on Roma communities to ethnic cleansing. This was, she said, 'a situation that I had thought that Europe would not have to witness again after the Second World War.' The comments were embarrassing for the French government and were likely to put France’s relations with the European Commission under strain. While any legal proceedings could be lengthy, the prospect of a public shaming seemed to have forced Paris to soften its stance already. On Monday, Interior Minister Brice Hortefeux signed a replacement directive that left out the reference to 'Roma.' Discriminating on ethnic grounds contravenes not only European Union laws and charters, but also the French Constitution. One prominent French organization supporting immigrant rights, Gisti, said it also was contemplating a lawsuit against the government. 'Can you imagine a directive explicitly naming Jews or Arabs?' asked Stéphane Maugendre, the president of Gisti, on France Info radio. But if French officials were backpedaling behind the scenes, publicly they expressed little remorse. [...]"
Posted by Adam Jones, Ph.D. at 9:29 AM