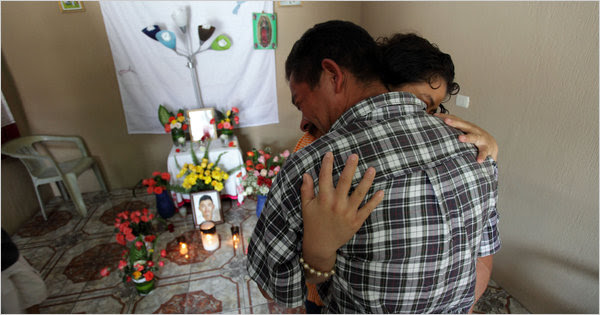 Massacre of Migrants Leaves Trail of Anguish Across Latin America
By Randal C. Archibold
The New York Times, September 1, 2010
Photo: "Gilmar Morales’s father and widow, who asked that their names not be used because of fears of reprisals, mourned at the family home in Agua Caliente." (Daniel Hernandez-Salazar/New York Times)
"He was warned the journey north would be hard, so Gilmar Morales beefed up on eggs and sausage, bought some ham sandwiches from the bodega across the street, told his mother he loved her and set off with two other relatives on a path well-traveled by young people here in one of Latin America’s poorest countries. Then, a few weeks later his mother, watching a television news show, looked hard at a picture of the bodies of 72 Central and South American migrants killed last week in northeast Mexico near the Texas border. Was that Gilmar, the one with the familiar yellow-and-white striped T-shirt, his blue pants? 'They told us they are sending his body this week,' said Mr. Morales's father inside the small cinder-block family home here, next to an altar of flowers and candles in honor of Mr. Morales, 22, and his companions headed north, later confirmed to be victims of the massacre. Despite all the hardships and perils that stand before them -- a raging drug war in Mexico, walls, border agents, National Guard troops, anti-immigrant fervor and a fragile economy if they even make it -- they still come. And they still die, often in the deserts of the Southwest, sometimes at the hands of thieves and kidnappers and now, in a startling twist, apparently at the hands of a drug gang seeking money or possibly recruits, officials said, though nobody knows for sure.
Mexican officials confirmed Wednesday that they were questioning a second survivor, a Honduran man, beyond the Ecuadorean who first alerted them to the killings. The toll in this massacre was staggering: 21 Hondurans, 12 Salvadorans, a Brazilian, 5 Guatemalans. Those are just the ones who have been identified. The authorities in Mexico are taking DNA samples, photographs and other steps to make final confirmations of these victims and identify the others killed, but, if the lessons of migrants found dead in Arizona are a guide, it could take months or years to know who the victims were. Indeed, the authorities may never know. The rush to ministries in the countries where it is believed the migrants originated suggests that many more than these 72 have met uncertain fates. At least 40 people have called Guatemala's Foreign Ministry, looking for information on loved ones. Ninety showed up in El Salvador doing the same, and a similar crowd gathered in Honduras, where the relative of one man confirmed dead fainted at a government office upon hearing the news. [...]"
Posted by Adam Jones, Ph.D. at 6:16 PM