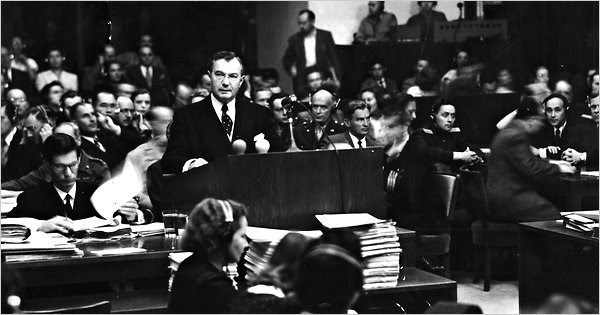 Rare Scenes Re-Emerge From Nuremberg Trials
By A. O. Scott
The New York Times, September 28, 2010
Photo: "Justice Robert H. Jackson of the Supreme Court, the chief United States prosecutor at the Nuremberg war crimes trials." (cShulberg Productions)
"[...] The United States government never released [Budd Schulberg's] documentary (though it did later adapt some of his materials into a film called 'Nuremberg: Its Lessons for Today'), and the negative and soundtrack were lost or destroyed. Sandra Schulberg, the filmmaker's daughter, and Josh Waletzky have now turned the surviving materials into something haunting and vivid -- a version of the original that is also, implicitly, a record of its partial vanishing. This 'Nuremberg' does not exactly reveal anything new. Later trials of lesser officials inspired Stanley Kramer’s 'Judgment at Nuremberg' (1961), a good, long feature with an all-star cast and a sober respect for history. And the Holocaust has been the subject of countless films of all kinds, especially in recent years, as the first-hand memory of survivors has begun to fade, and the children and grandchildren of both victims and perpetrators take up the burden of interpreting painful history. The shocking revelations that appear in Schulberg's film are now well known. But there is a raw immediacy in 'Nuremberg' that nearly closes the gap between past and present. You don’t necessarily see images of slaughter and cruelty for the first time, but you grasp some of what it must have been like to do so -- to uncover clips showing what most human beings up until then could never have imagined. You also appreciate the systematic, scrupulous nature of the trials themselves, which combined legalistic punctiliousness with deep moral passion.
The guiding spirit of the Nuremberg trials is worth recalling now, in the midst of the continuing argument about how to deal properly with enemies who show nothing but contempt for the norms of liberal society. The Nuremberg answer was to hold onto those norms with a special tenacity, to afford the accused precisely the acknowledgment of humanity that they had denied their victims. That they were allowed to defend themselves also meant that they had, in front of the world, to choose whether to admit their depravity, lie about it or try to justify it. [...]"
Posted by Adam Jones, Ph.D. at 10:02 AM