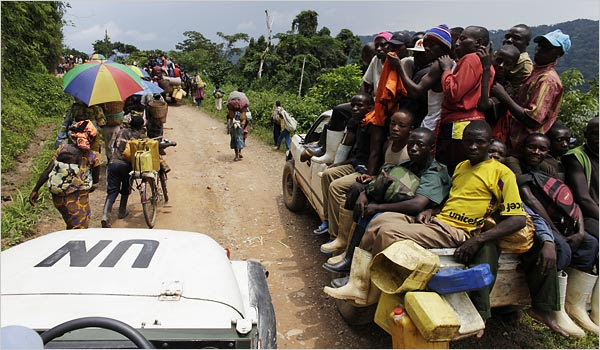 Frenzy of Rape in Congo Reveals UN Weakness
By Jeffrey Gettleman
The New York Times, October 3, 2010
Photo: "United Nations peacekeepers protecting civilians by escorting them home from a market in the Democratic Republic of Congo." (Michael Kamber/The New York Times)
"Four armed men barged into Anna Mburano's hut, slapped the children and threw them down. They flipped Mrs. Mburano on her back, she said, and raped her, repeatedly. It did not matter that dozens of United Nations peacekeepers were based just up the road. Or that Mrs. Mburano is around 80 years old. 'Grandsons!' she yelled. 'Get off me!' As soon as they finished, they moved house to house, along with hundreds of other marauding rebels, gang-raping at least 200 women. What happened in this remote, thatched-roof village on July 30 and continued for at least three more days has become a searing embarrassment for the United Nations mission in Congo. Despite more than 10 years of experience and billions of dollars, the peacekeeping force still seems to be failing at its most elemental task: protecting civilians. The United Nations' blue-helmets are considered the last line of defense in eastern Congo, given that the nation's own army has a long history of abuses, that the police are often invisible or drunk and that the hills are teeming with rebels. But many critics contend that nowhere else in the world has the United Nations invested so much and accomplished so little.
What happened in Luvungi, with nearby peacekeepers failing to respond to a village under siege, is similar to a massacre in Kiwanja in 2008, when rebels killed 150 people within earshot of a United Nations base. 'Congo is the UN's crowning failure,' said Eve Ensler, author of 'The Vagina Monologues,' whose advocacy group, V-Day, has been working with Congolese women for years. She blamed poor management, bad communication and racism. 'If the women being raped were the daughters or wives or mothers of the power elites,' she said, 'I can promise you this war would have ended about 12 years ago.' [...]"
Posted by Adam Jones, Ph.D. at 8:46 AM