A correspondent has posted to my blog and elsewhere convincing evidence that Bloomsbury, publisher of Frank Dikötter's 2010 book Mao's Great Famine: The History of China's Most Devastating Catastrophe, has misrepresented the cover photo of an orphan begging during a 1946 famine in Nationalist China as an image from the mass famine of the Great Leap Forward period under Mao Zedong's Communist Party (1958-62).

The cover of Dikötter's book: 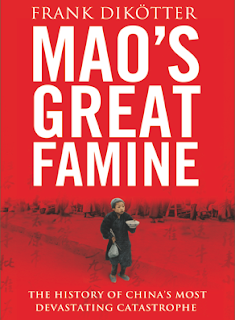 Here's a scan I made of a close-up of the apparent victim of "Mao's great famine": 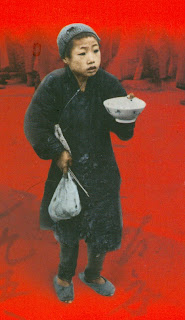 And finally, the 1946 photo from LIFE (Mao's Communists did not seize national power until 1949): 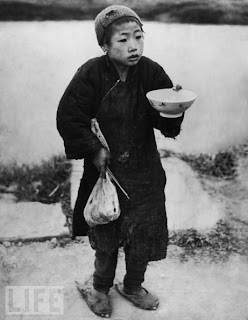 (Link to the version of the image as posted on the LIFE site, captioned: "May 1946: Starving child holding out an empty rice bowl during famine.")

I think Wayne is deeply naive about the nature of Mao's rule and the devastation of the Great Leap Forward period. I discuss the famine and its terrible toll in my revised Chapter 5, "Stalin and Mao," for the second edition of my textbook, Genocide: A Comprehensive Introduction. But this is clearly a serious error that the author and publisher need to address promptly.

Beyond the misrepresentation, may I also suggest that the very extensive airbrushing, replacement/grafting of background, colourization and so on of the original image is curiously reminiscent of communist practice under Mao and Stalin?

Comments
We need new
progressive
anthems!
ANTHEMS
FOR A NEW
GENERATION
A blog and
songbook by
Adam Jones