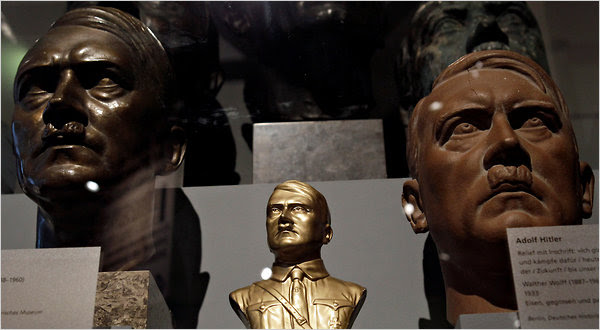 Hitler Exhibit Explores a Wider Circle of Guilt
By Michael Slackman
The New York Times, October 15, 2010
Photo: Michael Sohn/Associated Press
"As artifacts go, they are mere trinkets -- an old purse, playing cards, a lantern. Even the display that caused the crowds to stop and stare is a simple embroidered tapestry, stitched by village women. But the exhibits that opened Friday at the German Historical Museum are intentionally prosaic: they emphasize the everyday way that ordinary Germans once accepted, and often celebrated, Hitler. The household items had Nazi logos and colors. The tapestry, a tribute to the union of church, state and party, was woven by a church congregation at the behest of their priest. 'This is what we call self-mobilization of society,' said Hans-Ulrich Thamer, one of three curators to assemble the exhibit at the German Historical Museum. 'As a person, Hitler was a very ordinary man. He was nothing without the people.' This show, 'Hitler and the Germans: Nation and Crime,' opened Friday. It was billed as the first in Germany since the end of World War II to focus exclusively on Adolf Hitler. Germany outlaws public displays of some Nazi symbols, and the curators took care to avoid showing items that appeared to glorify Hitler. His uniforms, for example, remained in storage. Instead, the show focuses on the society that nurtured and empowered him.
It is not the first time historians have argued that Hitler did not corral the Germans as much as the Germans elevated Hitler. But one curator said the message was arguably more vital for Germany now than at any time in the past six decades, as rising nationalism, more open hostility to immigrants and a generational disconnect from the events of the Nazi era have older Germans concerned about repeating the past. 'The only hope for stopping extremists is to isolate them from society so that they are separated, so they do not have a relationship with the bourgeoisie and the other classes,' Mr. Thamer said. 'The Nazis were members of high society. This was the dangerous moment. This we have to avoid from happening.' Increasingly, Germans have put the guilt of the past behind them, reasserting their pride in national identity in many positive ways. But there also have been troubling signs seeping from the margins into the mainstream. A best-selling book by a former banker promoted genetic theories of intelligence and said that Muslims were 'dumbing down' society. A leading politician condemned 'alien cultures.' A new right-wing party recently attracted hundreds to a speech by the far-right Dutch politician Geert Wilders. Even government officials say that immigrant children are picking on native Germans. The media is filled daily with reports of conflict between immigrants, especially Muslims, and Germans. The planners began discussing this kind of show 10 years ago, Mr. Thamer said. An expert committee viewed it as part of a continuum of penance and awareness that historians say began with the Auschwitz trials. [...]"
Posted by Adam Jones, Ph.D. at 8:28 AM