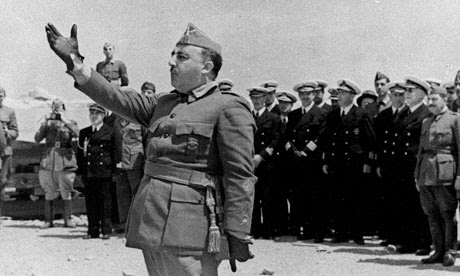 Argentinian Judge Petitions Spain to Try Civil War Crimes of Franco
By Giles Tremlett
The Guardian, October 26, 2010
Photo: "General Francisco Franco, pictured in Vinaroz, Spain, in July 1938, during the Spanish civil war." (AP)
"In a stark reversal of roles, an Argentine judge has taken a step towards opening the first comprehensive investigation into the human rights abuses of General Franco's dictatorship in Spain. Judge María Servini has asked Spain to declare whether its own courts are investigating cases of torture, murder and disappearance of Franco's political opponents. If amnesty laws prevent Spanish courts investigating the cases cited by Servini, which date from 1936 until the dictator's death in 1975, then she might declare her own court competent to investigate and try crimes allegedly committed by Franco's henchmen. In a formal petition to Spain, Servini indicates that the court would investigate allegations of genocide, including tens of thousands of cases of 'torture, assassination, forced disappearances and the stealing of children.' Her request mirrors those made over the past dozen years by Spanish courts which, using international law allowing human rights crimes to be investigated and tried elsewhere if a country cannot do so itself, have brought cases against several military regimes in Latin America. The Spanish magistrate Baltasar Garzón famously used this process to order the arrest of Chile's Augusto Pinochet in London in 1998. In that case the law lords ruled that the former dictator should be extradited to face trial in Spain, although Jack Straw, home secretary at the time, finally sent the general back to Chile on health grounds in 2000. Garzón used the same principle of universal jurisdiction to prosecute the Argentine navy captain Adolfo Scilingo in Madrid in 2005. Scilingo was jailed for throwing drugged political prisoners out of aircraft into the sea. Argentina later repealed its own amnesty laws and the country now tries dirty-war suspects. [...]"
Posted by Adam Jones, Ph.D. at 4:49 PM