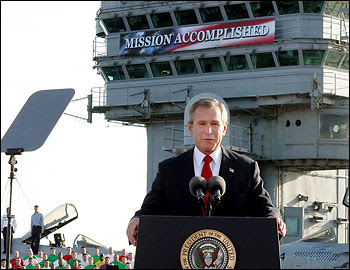 Bush Trip to Switzerland Called Off Amid Threats of Protests, Legal Action
By Peter Finn
The Washington Post, February 5, 2011
"A planned trip to Switzerland next week by George W. Bush was canceled after human rights activists called for demonstrations and threatened legal action over allegations that the former president sanctioned the torture of terrorism suspects. The New York-based Center for Constitutional Rights and several European human rights groups said they were planning to file a complaint against Bush and wanted Swiss prosecutors to open a criminal case against him once he arrived in the country. In what would have been his first European trip since leaving the presidency, Bush was scheduled to speak in Geneva on Feb. 12 at a dinner in honor of the United Israel Appeal. A lawyer for the organization said Bush's appearance was canceled because of the risk of violence, and that the threat of legal action was not an issue. 'The calls to demonstrate were sliding into dangerous terrain,' the lawyer, Robert Equey, told the Swiss daily Tribune de Geneve. A spokesman for Bush said the former president regretted that his speech was canceled. 'President Bush was looking forward to speaking about freedom and offering reflections from his time in office,' David Sherzer said in an e-mailed statement.
Sherzer said that Bush has traveled to Canada, Brazil, China, Japan, South Korea and the Middle East since leaving office. Organizers of a rally outside the Hotel Wilson, where the speech was scheduled to take place, had called on demonstrators to each bring a shoe, an effort to echo the assault on Bush during a news conference in Baghdad in 2008 when an Iraqi journalist threw a shoe at him. The Center for Constitutional Rights said in a statement that they had planned to bring the complaint under the Convention Against Torture on behalf of two of men, Majid Khan, who remains at Guantanamo Bay, Cuba, and Sami al-Hajj, a former Al Jazeera cameraman who was released in May 2008. The 2,500-page complaint will not be filed in court, but will be released Monday at a media event in Switzerland. 'Whatever Bush or his hosts say, we have no doubt he canceled his trip to avoid our case,' the Center's statement said. 'The message from civil society is clear: If you're a torturer, be careful in your travel plans. It's a slow process for accountability, but we keep going.' [...]"
Posted by Adam Jones, Ph.D. at 6:57 PM