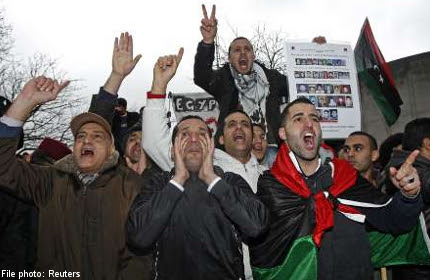 Black Men Face Death as Both Anti- and Pro-Gaddafi Bloc Hunt Them Down
The Star/Asia News Network, March 6, 2011
"It is a scary time to be a black man in Libya. The anti-Gaddafi protesters want to lynch you because they think you are a mercenary out to kill them, while the pro-Gaddafi forces want to kidnap you and force you to fight for them. Collins Daakqah from Ghana said he saw five dead Africans in Zawiyah, which is 30km from Tripoli. 'I saw a few Africans trying to leave but some armed men wouldn't let them and shot them. We were so afraid to stay inside if those people came after us, so we had to find a way to run away,' he said when met after crossing the border into Tunisia. Owusu Isaac also from Ghana was also relieved to make it out, but his heart is heavy. His face showed worry and he seemed preoccupied. His brother Stephen has been captured by the police in Tripoli and is being made to fight with the soldiers against the anti-Gaddafi protestors. 'They didn't know my brother still had his mobile phone with him. He managed to call me just to tell me that he was being taken away by the police and that he was given weapons and asked to fight. He was scared. A policeman spotted my brother talking to me on the phone and the line went dead,' he said. 'I want to try and help my brother but I can't. I need to run for my life,' he said. The men say they are not fighters or mercenaries and had merely come over to Libya to make a living. They were working in lowly-paid jobs, mostly plastering newly-built homes and half the time they didn't even get paid. In recent weeks, Libya has exploded into violence as anti-Gaddafi protestors have taken to the streets to try and oust their leader of 41 years, Muammar Gaddafi. But their leader has responded with heavy force to put down the uprising against him and even hired African mercenaries to do the killing and these men have been prowling the streets with weapons, shooting protestors indiscriminately In response, the anti-Gaddafi protestors have gone after the Africans and captured some of the mercenaries and even killed a few.
There have been reports that some Africans have been doused with petrol by angry protestors and burnt alive. There are approximately 1.5 million Africans working in Libya. And this group is growing increasingly worried that they are being hunted because of their colour and targeted as mercenaries although they are not. 'Our people are hiding. Some can't even get enough food to eat,' said Nicholas Gyamfi from Ghana, who said thousands of Africans are still stuck in Libya and unable to manage a safe passage out. In areas like Benghazi, which is under the anti-Gaddafi protestors control, he said he heard from friends there that 350 Ghanaians managed to make it out safely through Egypt with the help of the UN agencies. But those closer to the pro-Gaddafi controlled areas, it is also a challenge to get out. When we try to go out, the pro-Gaddafi people come after us and ask "why do you want to leave".' [...]"
[n.b. Thanks to Hannibal Travis for bringing this source to my attention. The gender dimension is of course ubiquitous.]
Posted by Adam Jones, Ph.D. at 10:12 PM