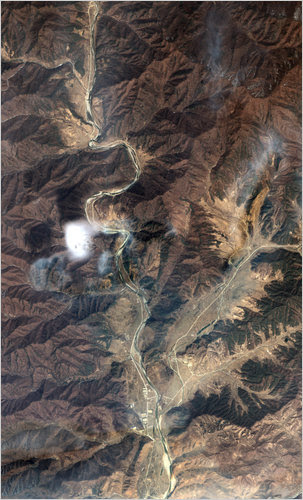 North Korean Prison Camps Massive and Growing
By Mark McDonald
The New York Times, May 4, 2011
"New satellite images and firsthand accounts from former political prisoners and former jailers in North Korea have confirmed the enormous scale and bleak conditions of the penal system in the secretive North, according to a report released Wednesday by the human rights group Amnesty International. A satellite image shows the Yodok prison camp in North Korea, mentioned in an Amnesty International report released Wednesday. The report estimates that the North's network of political prisons holds 200,000 prisoners. Former inmates at the political labor camp at Yodok, North Korea, said they were frequently tortured and had been forced to watch the executions of fellow prisoners, the report said, noting that the North's network of political prisons is estimated to hold 200,000 inmates. 'North Korea can no longer deny the undeniable,' said Sam Zarifi, the Asia Pacific director of Amnesty International. 'For decades, the authorities have refused to admit to the existence of mass political prison camps. These are places out of sight of the rest of the world.' The report says that almost all of the human rights protections that international law has tried to set up for the past 60 years 'are ignored.' After comparing recent satellite photos of prison camps with images from 10 years ago, Mr. Zarifi said, Amnesty International became concerned that the 'prison camps appear to be growing.' North Korea's work farms and prison factories are the world's most notorious, according to human rights experts. Political prisoners sentenced to hard labor initially included landlords, purged party officials and the religiously active, according to Stephan Haggard and Marcus Noland, the authors of 'Witness to Transformation,' an authoritative study of North Korean refugees. Political prisons, they said, also now hold 'anyone guilty of political or ideological crimes or even suspected of disloyalty,' adding that the system shows 'little pretense of due process.'
Son Hyang-sun, a woman who defected from North Korea 15 years ago because she was starving, said she was caught on her first escape attempt. She was convicted and jailed for four months. 'They tortured me with an electric stick, yes, a cattle prod,' she said in an interview with The International Herald Tribune. 'They stuck it everywhere.' A recent State Department report on human rights in North Korea said 'detainees and prisoners consistently reported violence and torture' as well as virtual starvation rations. In various accounts, escaped inmates have reported eating earthworms and rats to get enough protein to survive. Jeong Kyoung-il, a former Yodok inmate who was interviewed last month by Amnesty, said that deaths in the prison occurred almost daily. But the deaths of fellow prisoners came to be seen in a depraved and desperate light. 'Frankly, unlike in a normal society, we would like it, rather than feel sad, because if you bring a dead body and bury it, you would be given another bowl of food,' Mr. Jeong said. [...]"
Posted by Adam Jones, Ph.D. at 1:04 PM