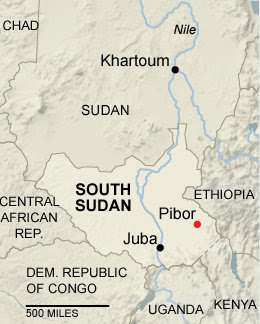 Accounts Emerge in South Sudan of 3,000 Deaths in Ethnic Violence
By Jeffrey Gettleman
The New York Times, January 5, 2012
"More than 3,000 villagers were massacred in the recent burst of communal violence in South Sudan, local officials said Thursday, with the fledging South Sudanese government, which just won its independence six months ago, seemingly unable to stem the bloodshed. If the death toll is confirmed -- United Nations officials and South Sudanese Army officers have yet to do that, saying they were still collecting information from the conflict zone -- this would be one of the deadliest clashes in South Sudan in recent memory. In the past two weeks, United Nations aircraft had been tracking an unusually large column of 6,000 to 8,000 heavily armed fighters from the Lou Nuer ethnic group as it advanced toward the town of Pibor, cutting a swath of destruction across the savanna. Pibor is the hometown of the Lou Nuer’s traditional rival, the Murle, and the two groups have been locked in a tit-for-tat cattle rustling feud for years, with the death toll steadily rising each round. According to Joshua Konyi, the commissioner of Pibor County and a Murle, 2,182 women and children and 959 men were killed, 1,293 children were abducted and 375,186 cows were stolen. 'We've been counting the bodies,' Mr. Konyi said by telephone from Pibor on Thursday night. 'It's really a genocide. If you come, you will see.' He said Lou Nuer fighters had mercilessly hunted down civilians who were cowering in the bush.
Other Murle leaders said hundreds of women had been chased into a river, where they drowned. Earlier this week, United Nations officials had a much lower estimate, describing a death toll 'in the tens, if not the hundreds' and saying that several corpses had already been unearthed. United Nations peacekeepers had tried to stop the fighters from storming the town of Pibor, but when it was clear that the peacekeepers and government soldiers were vastly outnumbered, Pibor's residents were advised to flee. As many as 50,000 people scattered across the area. At first, United Nations officials believed that the early warnings had saved many lives. 'At this stage, it's very difficult to get an accurate picture,' Kouider Zerrouk, a United Nations spokesman in South Sudan, said Thursday. 'We're not in a position to confirm any figures, and we’re in the process of assessing their validity.' The Pibor area is one of the most rugged and isolated parts of South Sudan, surrounded by thick forests and swamps. With thousands of fighters still roaming around and many roads inaccessible, United Nations officials said they would not know the full extent of the violence for several more days. South Sudan's military spokesman, Col. Philip Aguer, said, 'I'm sure many people died.' But the army, like the United Nations, was waiting for more details, he said. ... The cattle-rustling tradition in this part of South Sudan goes back generations. Both the Murle and the Lou Nuer prize cows and often lionize the young warriors who steal them. Years ago, the warriors clashed with spears. Now, they use AK-47s. Last year, the Lou Nuer attacked several Murle villages, stole cattle and killed hundreds. The Murle responded by attacking several Lou Nuer villages, stealing cattle and killing hundreds. The two groups often abduct women and children during these raids. Church elders tried to intervene, but talks broke down in December. Then the Lou Nuer began amassing a huge force of heavily armed youths. Lou Nuer elders said it was time to wipe out the smaller Murle group, once and for all. In late December, the column of Lou Nuer fighters began marching toward Pibor, burning huts along the way. The United Nations rushed 400 peacekeepers to Pibor, trying to defend the town alongside about 400 South Sudanese government troops. But as Colonel Aguer said, '800 can't stop 6,000.' When asked why so few soldiers were defending Pibor when it was clear an enormous force of Lou Nuer fighters was headed that way, he replied, 'It's a long story.' He elaborated that government troops were stretched thin across South Sudan, especially because of all the tensions along the oil-rich boundary between South Sudan and its northern neighbor, Sudan. The border has yet to be demarcated and could prime a major conflict between the two nations. Before South Sudan seceded from Sudan in July, the South Sudanese had been fighting a guerrilla war for independence for decades. 'The mission of the army is an external threat,' Colonel Aguer 'Nobody articulated such an internal threat would happen.' [...]"
Posted by Adam Jones, Ph.D. at 8:50 PM