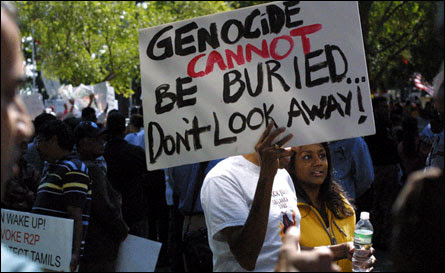 UN "Failed to Protect" Hundreds of Thousands of Civilians Caught Up in Sri Lankan Civil War
By Andrew Buncombe
The Independent, November 13, 2012
"The United Nations failed miserably to protect hundreds of thousands of civilians caught up in the last months of Sri Lanka's civil war, says an internal inquiry. According to the investigation, a draft of whose findings were obtained by the BBC, the organisation should in future be able 'to meet a much higher standard in fulfilling its protection and humanitarian responsibilities'. Chief among the findings of the review was criticism of the UN's decision to withdraw foreign and local staff from the war zone after September 2008 when the Sri Lankan authorities said they could no longer guarantee their safety. The review also questions why the UN failed to publish mounting civilian casualty figures that it obtained and was confident were accurate, and why -- under pressure from the Sri Lankan government -- it did not make clear that a 'large majority' of the civilian deaths were caused by government forces. Thousands of civilians lost their lives in the first five months of 2009 as government troops stepped up their operation to crush the last fighters of the once-powerful Liberation Tigers of Tamil Eelam (LTTE), a movement of militant Tamil separatists. The UN later said there convincing allegations that both sides committed war crimes. The UN said at the time that 10,000 civilians may have been killed. The Sri Lankan authorities did everything they could to ensure what took place on the battlefields in the north-east of the country did so without independent witnesses.
The north was cut off by strictly-enforced road-blocks and military check-points. Foreign journalists who were able to obtain visas were kept far away from the fighting. The authorities in Colombo, who have always denied that they deliberately fired at positions where there were civilians, also pressured the UN. Many within the organisation felt it was self-censoring in order not to be forced from the country. In truth, much of what is apparently contained in the inquiry's findings is not new. Gordon Weiss, who was the UN spokesman in Sri Lanka at the time who later resigned, detailed in his book The Cage, much of the criticism that was levelled at the organisation for its insistence of appearing neutral in the middle of 'the mass killing of people'. But the report suggests the reason this was allowed to happen was because senior staff in Colombo 'had insufficient political expertise and experience in armed conflicts and in human rights ... to deal with the challenge that Sri Lanka presented and were not given sufficient policy and political support [from headquarters].'  It also points to the Sri Lankan government's 'stratagem of intimidation', which included the control of visas to 'sanction staff critical of the state'. As a result, the UN operation was ridden through by 'a culture of trade-offs' and senior staff chose not to speak out for fear they would lose all humanitarian access. Last night, the UN declined to comment on the leaked finding but said that it will publish the report once it has been seen by UN Secretary General Ban Ki-moon. There was no immediate response from the Sri Lankan authorities. Its own internal inquiry -- widely condemned by human rights groups -- said the military had not committed war crimes."
[n.b. This is the complete text of the dispatch.]
Posted by Adam Jones, Ph.D. at 10:35 PM