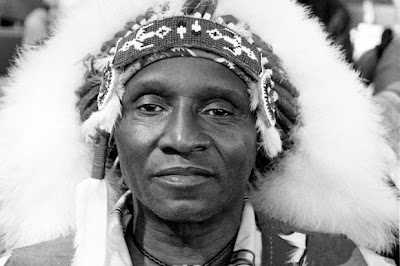 Slave Descendants Seek Equal Rights from Cherokee Nation
By Marcos Barberry
Salon.com, May 22, 2013
"On an oppressively hot evening last May, David Cornsilk addressed a room of so-called 'black Indians' at Gilcrease Hills Baptist Church in northwest Tulsa. He wore a leather-braided bolo tie clasped by an emerald quartz. Though Cornsilk never formally studied law, his voice bellowed with the rhetorical ire of a white-shoed seasoned litigator. 'By a show of hands, how many folks here tonight are Freedmen?' Cornsilk asked into the microphone. Each raised an arm. Visibly dismayed, Cornsilk shook his head. It was a trick question. 'No,' Cornsilk said. 'The Freedmen died a long time ago. You are not Freedmen. You are Cherokee, and it is time that you begin to recognize who you are.' Cornsilk is Cherokee, and a self-taught civil rights advocate and genealogist. He traces his slave-owning ancestors back to their aboriginal lands of Georgia and Tennessee -- to a period before the Trail of Tears. [...] Headquartered in Tahlequah, Oklahoma, the Cherokee Nation and its wholly owned business arm earned over a billion dollars last year through a myriad of businesses such as gaming, U.S. Department of Defense contracts, and federally funded programs. Today, taxpayers help support the Cherokee Nation through federal grants. The brutality committed by whites against American Indians -- especially the Trail of Tears -- has become a part of our national conscience. Yet it is hard to imagine that during this period an even more poorly documented atrocity was being perpetrated: The Cherokee were slave owners long before their forced removal from the southern states. By the time gold was discovered in Georgia at the dawn of the 19th century, Cherokee slave codes were indistinguishable from those enacted by the rest of the South. Soon after, when the US Indian Removal Act forced Cherokee and other Indians to relinquish their native land and move west, countless blacks enslaved by Cherokees crossed into the frontier bound and shackled. These black slaves suffered a far more violent experience than their Indian masters.
Nearly a third of the Cherokee Nation's citizens lost their lives during the Trail of Tears; the number of their slaves killed remains unknown. Once the Cherokee Nation arrived in what later became Oklahoma, they prospered in part due to their agrarian roots, large-scale plantations, and practice of slavery. Three decades later, when the Lincoln administration threatened slaveholders, the Cherokee Nation signed allegiance with the Confederacy. Finding themselves on the losing side of the Civil War, and their shrinking territory under threat once again, the Cherokee Nation sought to re-establish government-to-government relations with the US. In the summer of 1866, just months after U.S. lawmakers amended the Constitution to bar slavery, the Cherokee Nation entered into a treaty with the federal government. Among a long list of terms, the treaty granted perpetual freedom and full tribal membership to Cherokee slaves and their descendants. The Treaty of 1866 named these black, newly minted Cherokee members 'Freedmen.' From the last row of Gilcrease Hills Baptist Church's recreation hall, Kenneth Payton listened to David Cornsilk's voice rise and fall. Payton looks like a professional basketball player. He is six foot five, wears a tracksuit, and drives a pick-up. Payton lives in Broken Arrow with his wife and three of his four boys. His young sons append the word 'sir' to their responses, hinting at their father's service in the United States Army. When we first met, Payton's hand enveloped mine. Payton and other Freedmen descendants are represented in the pending US court case by Jon Velie, who is a licensed attorney based in Norman. Velie describes Payton as a 'Cherokee of African descent.' The unfolding lawsuit led by Velie challenges the Cherokee Nation's dismissal of its former black citizens. 'It's not a damages case,' Velie said. 'The Freedmen citizens simply want to be reinstated as full members of the tribe.' The ongoing litigation demands that the federal government enforce the 147-year-old treaty between the United States and Cherokee Nation, and restore tribal citizenship to Payton, his children, and potentially, tens of thousands of others who share similar ancestry. 'I tell my kids all the time, "You are Cherokee,"' Payton said. 'And they say, "Oh Dad, he is crazy," but it is true. We are Cherokee.' Payton is not alone. During the year I spent reporting this story, nearly everyone I met in Oklahoma claimed Indian heritage. To many, the notion that Indian blood pumps through them, irrespective of quantum or degree, is a birthright. It suggests a dual identity. And it insinuates indigenous roots -- a deeper, more authentic tie to land and country that predates statehood and union. But unlike most, Payton possesses the documents to back his claims. [...]"
Posted by Adam Jones, Ph.D. at 10:36 AM