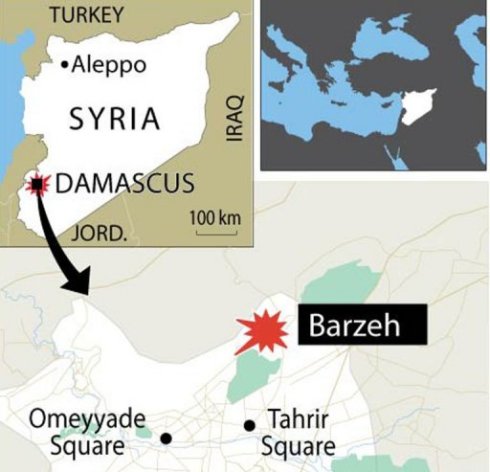 Dozens of Tortured Bodies Found in Damascus
Agence France-Presse dispatch on Yahoo! News, December 31, 2012
"Dozens of tortured bodies have been found in a flashpoint district of Damascus, a watchdog reported on Monday, in one of the worst atrocities in Syria's 21-month conflict. The report from the Syrian Observatory for Human Rights came as a gruesome video emerged on the Internet of a separate slaying of three children who had their throats slashed, also in the capital. 'Thirty bodies were found in the Barzeh district. They bore signs of torture and have so far not been identified,' said the Britain-based Observatory. The Syrian Revolution General Commission, a grassroots network of anti-regime activists, estimated there were 50 bodies, and added that 'their heads were cut and disfigured to the point that it was no longer possible to identify' them. The video posted online by activists showed the bodies of three young boys with their throats slit open and hands bound behind their backs. Their bodies were discovered on Monday in Jubar. The Observatory also reported the killing of the boys, who opposition activists said had been kidnapped the day before at a checkpoint on their way home from school. These reports could not be verified independently because of media restrictions by the Syrian authorities. Regime warplanes, meanwhile, bombarded rebel positions on the northeastern and southwestern outskirts of Damascus, leaving eight civilians dead including two children, said the Observatory. [...]"
[n.b. When you read "dozens of tortured bodies," translate as follows: "dozens of tortured males." Can you imagine dozens of murdered females being described in this fashion?]
Posted by Adam Jones, Ph.D. at 12:15 PM