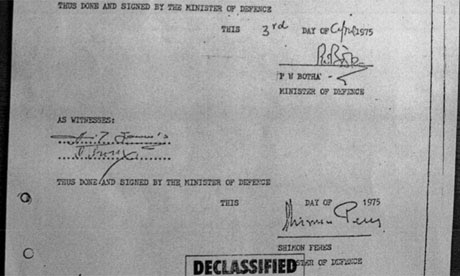 Revealed: How Israel Offered to Sell South Africa Nuclear Weapons
By Chris McGreal
The Guardian, May 24, 2010
"Secret South African documents reveal that Israel offered to sell nuclear warheads to the apartheid regime, providing the first official documentary evidence of the state's possession of nuclear weapons. The 'top secret' minutes of meetings between senior officials from the two countries in 1975 show that South Africa's defence minister, PW Botha, asked for the warheads and Shimon Peres, then Israel's defence minister and now its president, responded by offering them 'in three sizes.' The two men also signed a broad-ranging agreement governing military ties between the two countries that included a clause declaring that 'the very existence of this agreement' was to remain secret. The documents, uncovered by an American academic, Sasha Polakow-Suransky, in research for a book on the close relationship between the two countries, provide evidence that Israel has nuclear weapons despite its policy of 'ambiguity' in neither confirming nor denying their existence.
The Israeli authorities tried to stop South Africa's post-apartheid government declassifying the documents at Polakow-Suransky's request and the revelations will be an embarrassment, particularly as this week's nuclear non-proliferation talks in New York focus on the Middle East. They will also undermine Israel's attempts to suggest that, if it has nuclear weapons, it is a 'responsible' power that would not misuse them, whereas countries such as Iran cannot be trusted. A spokeswoman for Peres today said the report was baseless and there were 'never any negotiations' between the two countries. She did not comment on the authenticity of the documents. South African documents show that the apartheid-era military wanted the missiles as a deterrent and for potential strikes against neighbouring states. [...]"
[n.b. How very odd. Why would Israel have allied itself with a racist apartheid state seeking to cow rebellious native populations and intimidate its neighbours?]
Posted by Adam Jones, Ph.D. at 10:08 AM