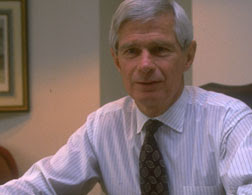 Fred Malek's Anti-Semitic Past Makes Him Unfit to Chair a State Government Panel
By Timothy Noah
Slate.com, May 21, 2010
"On May 7 Virginia Gov. Bob McDonnell appointed Fred Malek chairman of his Commission on Government Reform and Restructuring. McDonnell, a conservative Republican who assumed office in January, had achieved unwelcome national attention a month earlier when he declared April 'Confederate History Month' without mentioning that the Confederates fought to preserve slavery (because, he explained to reporters, slavery did not rate as one of the issues 'most significant for Virginia'). ... But Jewish groups have been slow to protest the appointment of Malek, whose most noteworthy prior experience in government reorganization dates to 1971, when Malek was a 34-year-old special assistant to President Richard Nixon. At Nixon's request, Malek produced a memo denoting the number of Jews employed by the Bureau of Labor Statistics. Malek then arranged the demotion of at least four people with Jewish-sounding surnames. (He didn't actually know who was Jewish and who wasn't; he guessed based on their names.) It was the last recorded act of official anti-Semitism by the United States government.
Why no outcry? 'Malek's defenders,' explains Frederick Kunkle in the May 21 Washington Post, 'have said that he long ago apologized and atoned for his role in the Nixon-led inquisition.' This view is widely held within Washington. But it happens to be wrong. Malek long ago copped to writing the Jew-counting memo, but he never admitted to -- indeed, he lied with theatrical indignation about -- his role in punishing the offending Semites, proof of which quietly surfaced in Slate three years ago. [...]"
Posted by Adam Jones, Ph.D. at 12:01 PM