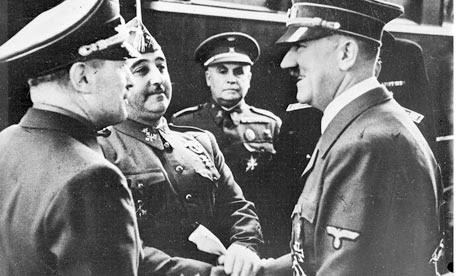 General Franco Gave List of Spanish Jews to Nazis
By Giles Tremlett
The Guardian, June 20, 2010
Photo: "Hitler and General Franco meet on the French side of the border on 23 October 1940." (LAPI/Roger Viollet/Getty Images)
"It was the list that would have sent thousands more Jews to their deaths in Auschwitz and other extermination camps run by Adolf Hitler's Nazi regime during the second world war, but this time the victims were to be Spaniards. The Spanish dictator, General Francisco Franco, whose apologists usually claim that he protected Jews, ordered his officials to draw up a list of some 6,000 Jews living in Spain and include them in a secret Jewish archive. That list was handed over to the Nazi architect of the so-called 'final solution,' the German SS chief Heinrich Himmler, as the two countries negotiated Spain's possible incorporation into the group of Axis powers that included Italy, according to the El País newspaper today. The newspaper printed the original order, recently unearthed from Spanish archives, that instructed provincial governors to elaborate lists of 'all the national and foreign Jews living in the province ... showing their personal and political leanings, means of living, commercial activities, degree of danger and security category.' Provincial governors were ordered to look out especially for Sephardic Jews, descendants of those expelled from Spain in 1492, because their Ladino language and Hispanic background helped them fit into Spanish society. [...]"
Posted by Adam Jones, Ph.D. at 10:11 AM