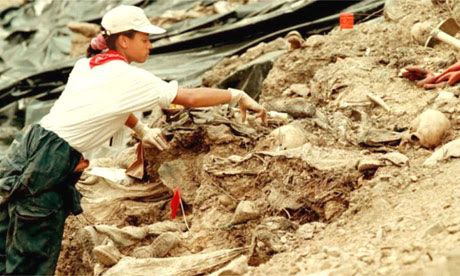 What Stands in the Way of Bosnia Reconciliation
By Heather McRobie
The Guardian, June 21, 2010
Photo: "An UN investigator removes earth from bodies in a mass grave outside the village of Cerska, near Srebrenica, Bosnia on July 15, 1996." (Odd Andersen/Getty Images)
"[...] An initiative by a German NGO is currently under way to construct a 'pillar of shame' intended to draw attention to the UN's failure to fully own up to its share of responsibility for the Srebrenica genocide 15 years after 8,000 unarmed Bosnian Muslim men and boys were murdered by Bosnian Serb forces in the UN 'safe area.' The pillar will spell out the letters UN using 16,744 shoes, representing the numbers of the victims of Srebrenica, and intends to 'serve as a metaphor for the immense betrayal of the UN in Bosnia and Herzegovina.' The pillar will be presented at The Hague on 1 July, and in Berlin on 11 July, the day Srebrenica fell to the Bosnian Serb army in 1995. The pillar of shame project is supported by the Mothers of Srebrenica, the group representing survivors and relatives of those who were killed in Srebrenica, who filed a law suit against the UN at the Hague, accusing the peacekeepers of failing to take necessary steps to prevent the genocide.
The case was rejected earlier this year on the grounds of the UN's immunity from prosecution, yet the UN itself has admitted its failure in Srebrenica -- it just refuses to do so legally. Kofi Annan himself acknowledged that force should have been used to stop the killings, and that peacekeepers 'must never again be deployed into an environment in which there is no ceasefire or peace agreement.' But on any attempts to bring legal redress for the UN's own admission of failure, the international organisation is unwilling to waive its own immunity from prosecution. The UN's desire to restore its credibility on the genocide was also undermined by its own admission that evidence from Srebrenica had been destroyed at the ICTY. [...]"
Posted by Adam Jones, Ph.D. at 10:17 AM